I can’t help but feel that this post is overdue. After all, to run a website called “On This Rock Apologetics” without having explained what “apologetics” is could be one of my larger oversights. Especially since the word seems to convey the opposite of what it actually means.

What Catholic Apologetics Is Not

It must be said. It’s low hanging-fruit. Catholic apologetics is not the art of apologizing for being Catholic. It might sound like that’s what it means, but it couldn’t be further from the truth. Contrary to what it sounds like it should mean, “apologetics” doesn’t imply an apology… at least, not the way we understand a modern “apology”.

Ok, to be fair, apologetics actually does imply an apology. We get the word apologetics from a Greek root apologia, meaning apology.1 But the way it’s used is vastly different from our English meaning of the word. Afterall, in modern day English, an apology is an expression of regret and sorrow for one’s actions. But the apology in apologetics is different. 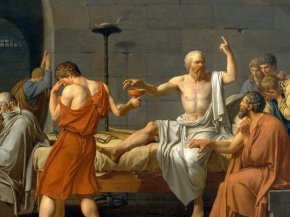 If you’ve ever taken an introductory class on philosophy, you may be familiar with a work known as The Apology. In The Apology, the great Greek philosopher, Socrates, is being tried by the people of Athens for his conduct. In defense, Socrates presents an apologia, or a defense for his actions, explaining himself to his accusers. His apologia is anything but him saying he is sorry for his actions.

I won’t spoil the ending, though I would encourage you to read it if you’ve not already. And so the word apology in apologetics doesn’t imply sorrow or regret for something. Quite the opposite. It is an explanation or a defense.

The idea of presenting an apologia for the faith is not lost in the Bible. In fact, the early Church did a great deal of defending the Gospel. Naturally a new religion would be surrounded by skeptics of all stripes, and the early Christians would need to be well equipped to deal with the objections of Jews and Gentiles alike.

St. Paul wrote to the Philippians, telling them that he holds them in his heart, “for you are all partakers with me of grace, both in my imprisonment and in the defense [apologia] and confirmation of the gospel” (Phil 1:6-7).2

Similarly, St. Peter wrote saying that we must “Always be prepared to make a defense [apologian] to any one who calls you to account for the hope that is in you” (1 Peter 3:15).3

Catholic apologetics, then, is the art of explaining and defending the Catholic faith.

In his preface to the classic, Radio Replies, Fulton J. Sheen said that “There are not one hundred people in the United States who hate The Catholic Church, but there are millions who hate what they wrongly perceive the Catholic Church to be.”4

Someone once told me that she doesn’t worship an idol called Mother Mary (implying that Catholics do). Can you blame her? The Church doesn’t even teach that we are to worship Mary. Rather than defend the faith, it just needed to be explained.

So many misunderstandings can be cleared up by simply stating what Catholics actually do teach.

A Labor of Love

That means a good apologist isn’t just out to win an argument. Look at the rest of what St. Peter said: “Always be prepared to make a defense to any one who calls you to account for the hope that is in you, yet do it with gentleness and reverence” (1 Peter 3:15, emphasis added).

Good apologetics is rooted in love: A love of God that makes us desire earnestly that others should find the peace and joy that we have found in Jesus; a love of others that drives us to share that peace and joy; a love of truth that motivates us to share it with all. What’s the point of defending the faith if I’m not doing it out of love? Good Catholic apologetics is the art of explaining and defending the teaching of the Catholic Church with sound reasoning and love.

I believe St. Paul’s words are especially true for anyone who practices apologetics: “if I have prophetic powers, and understand all mysteries and all knowledge, and if I have all faith, so as to remove mountains, but do not have love, I am nothing” (1 Cor 13:2).

1. From the definition of “Apologetics” in the Catholic Encyclopedia https://www.catholic.com/encyclopedia/apologetics

5. From Trent Horn’s CD, A Beginner’s Guide to Defending Your Faith https://shop.catholic.com/a-beginners-guide-to-defending-your-faith/

6 replies to What is Apologetics?